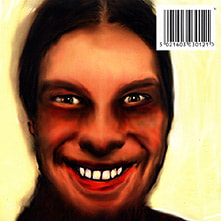 On the list of most ironic album titles, Aphex Twin’s ...I Care Because You Do would at least be in the top five, for good old Richard D. James himself has repeatedly stated in interviews how he never cares about what anyone else thinks of his music or if they even listen to it, as well as that the only reason he even releases it in the first place is to make some money. Even more ironically, despite being Aphex’s first album to not feature Selected Ambient Works in the title, it is also a collection of songs dating from various years, with the only real difference being that they show him moving away from the minimalist sound of his previous two albums (not least the anti-accessible Selected Ambient Works, Vol. 2) in favor of a denser, more accessible approach.

When this style works, such as on the brilliantly noisy “Ventolin”, the strings-laden “Icct Hedral”, or–best of all–the beautifully spacey “Alberto Balsalm”, it’s absolutely wonderful. Unfortunately, the rest of I Care sounds a lot more like James struggling to figure himself out than smoothly composing the timeless IDM he’s famous for. This is admittedly understandable on the tracks dating all the way back to when he was really first starting out, 1990, but not so much on some of the newest ones, from 1994. Yes, the later Drukqs also occasionally suffered from its varying levels of quality, but that double album’s completely random wackiness made it a pretty entertaining listen. I Care, on the other hand, is sometimes, well… kinda forgettable (“Cow Cud is a Twin”, anyone?). Yes, really cool-sounding, but still forgettable nevertheless.

All right, I think I’m being a little harsh here. After all, even the worst Aphex Twin album is still pretty solid overall, and while this one is easily one of the techno giant’s weakest, I’d still highly recommend it nevertheless. At the very least, just check out the three highlights mentioned above; easily among his best work ever if you ask me.