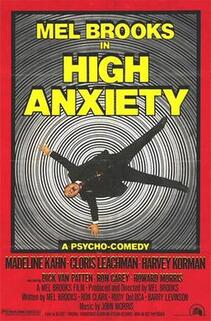 Alfred Hitchcock’s classic suspense/psychological thriller films (many of which I saw with my dad a while ago) are universally hailed as utter masterpieces, and for good reason, too. As such, it was inevitable that somebody would eventually parody them, and who better to take up that task than Mel Brooks, director of comedy classics such as Blazing Saddles and Young Frankenstein? And what better time to do this than the mid-‘70s, when the master himself was still alive, but had just a cap on his filmmaking career once and for all? Sounds like an instant formula for constant hilarity, am I right? Well, yeah– sometimes.

Brooks, who also wrote and directed Anxiety, stars in his first main speaking role (his first main role ever, Silent Movie, unsurprisingly featured him being, well, silent the entire time) as Dr. Richard Thorndyke, an extremely anxiety-ridden man hired as the replacement for the mysteriously deceased Dr. Ashley at the Psycho-Neurotic Institute for the Very, Very Nervous. Of course, despite his best efforts, things go wrong pretty quickly, and, in typical Hitchcockian fashion, he soon winds up fleeing from the authorities for a murder he didn’t commit. Lots of silliness ensues, but genuine laughs surprisingly come less frequently than you might expect from a Brooks film.

While trying to piece together in my mind why this was really the case, I came across this at the very beginning of Roger Ebert’s 2.5/4 star (a score roughly translating into the one I have for you below) review of the film: “One of the problems with Mel Brooks's ‘High Anxiety’ is that it picks a tricky target: It's a spoof of the work of Alfred Hitchcock, but Hitchcock's films are often funny themselves. And satire works best when its target is self-important.” Very true.

He then goes on to say “The best moments in ‘High Anxiety’ come not when Brooks is being assaulted in the shower with a rolled-up newspaper, but when Brooks leaves Hitchcock altogether and does his own crazy, brilliant stuff.” With a few exceptions (the “Cocker Spaniel” scene–don’t ask–being among them), I couldn’t agree more with this as well. The parts with Nurse Diesel, a cartoonishly nasty staff member at the Institute with a fondness for S&M (yes, that was something PG let you show back then– oh, how the times have changed)? Absolutely hilarious. Thorndyke running madly as he’s pelted with bird droppings in an obvious takeoff of the famous “playground” scene in The Birds? Yeah... not so much.

At least High Anxiety was lightly entertaining enough for Mr. Hitchcock himself (who also helped work on the screenplay) to give it his stamp of approval, and if that fact isn’t enough to make you want to watch the film pronto, I don’t know what is. Just don’t expect consistency.