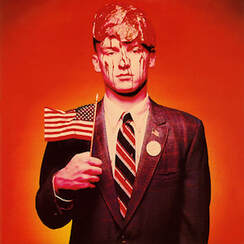 Maybe this is just because I haven’t listened to that much of them (in fact, this and Psalm 69 are their only two albums that I currently have personal copies of), but as far as I can tell, no other album in Ministry’s entire discography has so sharply divided critics and fans as Filth Pig, the extremely, well, different followup to the acclaimed Psalm 69. With the exception of the now-demised music magazine Cash Box, the former were baffled, with a particularly negative review coming from Robert Christgau ("a grindcore album worth hating"- ouch); however, the latter grew to wholeheartedly love Pig and proclaim it the band’s best album, and while that notion is simply ridiculous, I do have to admit that it doesn’t warrant all the hatred initially leveled at it.

Even so, let me just get one thing clear right now: it’s not really easy to listen to. In fact, the complete lack of the speedy industrial-thrash that shot Ministry to fame on masterpieces such as Psalm in favor of slower, sludgier guitar noise is pretty jarring at first, with the tuneless first half being an especially difficult listen; not a bad thing in itself, but irritating slogs such as “Crumbs” really made me wonder where any sense of fun or creativity went. Luckily, the more accessible second half answered that question right away, and is where things started getting really good (whether it be on the Tool-esque “Game Show”, the nightmarish “The Fall”, or–best of all–an awesomely apocalyptic cover of Bob Dylan’s “Lay Lady Lay”), so when the surprisingly danceable “Brick Windows” finally put the album to a close, I was left thinking “Wait, now it’s over? Why?”

However, despite its very uneven quality, I’d say that Pig ultimately holds up pretty well overall, especially considering how much weaker and more confused Ministry would eventually get later. Maybe not the best way to get introduced to these guys, but a fairly worthwhile listen for noise-craving metalheads in any other case.