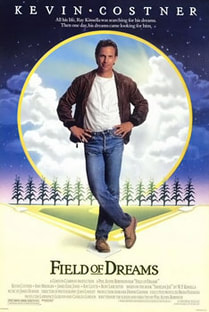 You would literally have to be living under a rock to not hear of the phrase "If you build it, he will come” at least once. Despite that quote probably being one of the corniest things ever, it has somehow become one of the most instantly recognizable parts of American culture anyway. The same could be said for the film it comes from, Field of Dreams, a ridiculously overrated supernatural sports drama (no, that’s not nearly as fun as it sounds like) that represents the so-called “male weepie” at its most sluggish and ineffective.

Kevin Costner stars as Ray Kinsella, an Iowan farmer who, as he’s walking through his cornfield one night, not only hears a mysterious voice repeatedly whisper the aforementioned quote to him, but also has a vision of a baseball diamond right in the middle of this very field. Of course, he immediately builds it, and of course, “he”–the ghost of “Shoeless” Joe Jackson (who, ironically enough, is never shoeless any of the times we see him)–instantly shows up there the very night afterwards, though at least the scene when he does so is more effective than when the ghosts of all the other long-dead baseball players show up in broad daylight and start to play with each other.

Even worse, the film just descends into a pure banality from which it never emerges once Ray starts traveling around the country in an effort to find the controversial writer Terrence Malick (James Earl Jones, easily the best part of the entire movie) and bring him to this “field of dreams” because the voice apparently told him to or something. And yes, I know that the ending scene is apparently supposed to “make grown men cry”, but–without spoiling anything–while it certainly was a nice moment, neither the central plot point or characters surrounding it were even remotely developed enough for it to move me or my own dad that much.

And really, the lack of any real depth or conflict in not only that scene, but also the entire rest of the film as well, is easily its biggest flaw, especially when the family’s big financial problems as a result of building the diamond are literally never mentioned again after our antagonist, the unbelieving brother of Ray’s ever-trusting wife, Annie, finally sees the ghosts and just says “Don’t sell the farm.” In fact, as horrible as this may sound, when Ray’s young daughter fell off the edge of the bleachers and was knocked unconscious, I was actually relieved because it meant that something was finally happening, though even that little problem is almost instantly fixed too. Oh well.

Look, I am not some kind of stuffy person who only likes films if they’re really long or “deep”; in fact, there are quite a few pretty lightweight ones (My Cousin Vinny, The Fifth Element, Logan’s Run) that I’ve given positive ratings to. It’s just the cheesy, shamelessly schmaltzy “tearjerkers” that I absolutely cannot stand, especially when they’re as clumsily told as this one. Maybe you like them, which is completely fine. Don't let me ruin the fun you might have watching them.