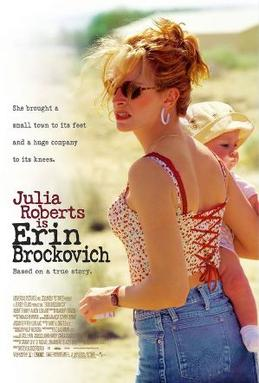 As far as these “feel-good” true-life stories go, Erin Brockovich, the film that essentially broke director Steven Soderbergh into the mainstream after indie hits such as sex, lies, and videotape, is refreshing in that it doesn’t try to take its compelling premise and drown it in buckets of gooey schmaltz or water everything down; in fact, it’s more or less the exact opposite of what would you would typically expect from this kind of movie- though that’s not to say that it’s completely without its flaws.

Unemployed, nearly broke, and barely managing to raise three young kids on her own even without the car crash that left her in a neck brace, Erin Brockovich is at the end of her rope. However, when she starts work at a law firm, she uncovers shocking evidence of plutonium from Pacific Gas & Electric Company (PG&E for short) leaking into the water that nearby people drink- something the company knows about, but has decided not to tell anyone about for fear of damaging their reputation. Unfortunately for them, she most definitely will.

Though the more unpolished feel, thankful lack of cheesy pop songs, and needlessly slow/unfocused execution (the discovery mentioned above doesn’t even happen until half an hour in) are all extremely noticeable as well, the part of the movie that easily stands out the most is the character of Erin herself, which is both one of its biggest strengths and flaws. On one hand, she’s brave, smart, and relentlessly determined; on the other, she’s loud, brash, and clad in extremely skimpy clothing to the point where the sexual tension between her and some of the other men she apparently manipulates with her chest to get what she wants (something the real-life Brockovich, who makes a cameo towards the beginning as a waitress, has denied) becomes distracting. However, Julia Roberts’ deservedly Oscar-winning performance as her is amazing, and I really do wish to see her in more of these types of these films in the future. It’s just that her character didn’t need to be so over-the-top to really advance the plot. Even so, as a gripping, good old-fashioned inspirational flick that will want you to go out and make a difference in your community, Erin Brockovich is well worth a watch.