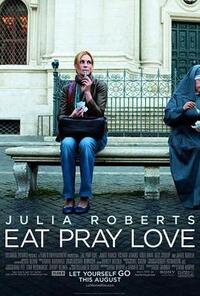 Groan. That’s really the only way I can describe Eat Pray Love, a stupid fantasy for bored middle-aged women that so shamelessly presses all the buttons designed to appeal to that particular age group (in fact, the Home Shopping Network even ran advertising for merchandise surrounding the film for 72 hours straight) while literally doing nothing else, just the mere thought of it gets me more and more annoyed. Duty calls, though, so I guess I'll just have to keep on talking about it.

More or less based on the true-life book, Eat Pray Love stars Roberts as Elizabeth Gilbert, a woman who divorces her husband and then decides to just travel all over the world in order to “regain her passion in life” or some faux-inspirational crap like that. We get zero depth as to why her marriage suddenly collapsed like that, literally making it impossible for me to feel any sort of emotional connection whatsoever to her as far as that goes (then again, I didn’t feel emotionally connected to her at all in any point of the film since she’s a completely self-absorbed bimbo, but whatever). But hey, who cares about that since she’s now in Italy, flipping through her translator book and cramming her face full of pasta! Oh, look, she’s now in India discovering the “power of prayer", and an elephant literally comes out of nowhere and lets her pet it! (Yes, that’s a thing that actually happens in this movie.) Wait, she’s now in Indonesia, where she reunites with the exact same medicine man that she met during some journalist trip years ago and hooks up with some random guy that nearly runs her over with his car! Is she going to get back together with him after randomly leaving for no apparent reason like she did with her ex-husband? Gee, let me think...

All right, now that I’m done ranting, I will admit that the scenery in these three aforementioned countries is pretty, but hey, another film I recently reviewed, Running for Grace, also had nice cinematography, and look how much of an utter mess that film was. Then again, if we're going to be watching somebody freely hop from country to country for more than two hours (!) without even remotely caring about how much it must cost, there should at least be a mere sliver of wit, personality, self-awareness, character development, or something, anything else that would finally make the film go somewhere (kind of ironic, considering what the film’s about), right? Nope.

Just in case you still really want to see Eat Pray Love, though, do yourself a favor and look up one of the trailers for it instead. You'd be essentially seeing everything that happens in the film, only without having to sit through it for the aforementioned amount of time. Now there's a time-saver.

Note: After endlessly going back and forth on giving this film a 3/10 and 4/10, I finally decided on the latter after coming to the conclusion that it admittedly wasn't quite irritating or ridiculous enough to justify giving it the lower rating. But still, I really do loathe this movie.