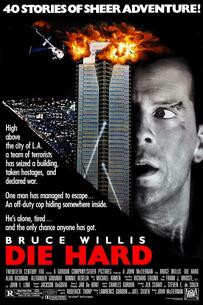 And you thought I would never get around to watching any Christmas movies, what with it being pretty late in the month of December and all. All right, Die Hard isn’t about that particular occasion per se, but the fact that it takes place on December 24th and features several subtle nods to the season should tell you all you need to know about where the film’s heart lies (yes, I know it was released in July, but hey, Love Actually is also hailed by many as a great Christmas movie, and that film debuted in theaters around late November). Holiday flick or not, though, I think we can all agree that Die Hard is one of the best action thrillers ever made, no questions asked.

For starters, the film isn’t just a big piece of enjoyably dumb fun. In fact, the first 15 minutes or so are actually pretty slow, with character development being the prime focus as John McClane (Bruce Willis, whose role here instantly made him a Hollywood superstar), an off-duty New York cop, tries to reconcile with his estranged wife, Holly (Bonnie Bedelia), by flying to Los Angeles to drop by the office Christmas party of her employer there, the Nakatomi Corporation, but only ends up getting in yet another argument with her. Then a group of terrorists led by the supremely evil Hans Gruber (Alan Rickman) seize control of the 40-story building in which this is taking place and take everybody hostage except, unbeknownst to them, McClane, who slips away (initially) armed with only his wits and a typical service revolver, but filled with determination to take them all down. And boy howdy, does he ever.
​
At that point, Die Hard takes the unholy trinity of blood, bullets, and bad language and pushes them all to the max with truly profound R-rated glee, and this excess is really a treat, considering how many action flicks these days (including, ironically enough, a film in the Die Hard series, Live Free or Die Hard) are forced into being PG-13 tame for the sake of “making more money" (yay), though the fact that this trend finally seems to be ending since Terminator: Dark Fate (the newest entry in the long-running Terminator franchise) is rated R. as opposed to the PG-13 Terminator Salvation and Terminator Genisys got (an R-rated director's cut of the former film is available, though), is the best news I’ve heard in ages.

Anyhoo, every single second of this ridiculously over-the-top carnage is extraordinarily entertaining, but the addition of genuine suspense, consistently clever dialogue (“Nine million terrorists in the world and I have to kill one with feet smaller than my little sister”--God, I love that line), and even some more character development on McClane's part balances it out and, again, provides some surprising depth to what looks at first glance to just be another “stupid” thriller.

Admittedly, Die Hard isn’t without some minor weak spots--Paul Gleason’s “deputy” character is more than a little annoying (though Roger Ebert devoting so much of his mixed review of the film to him is even more so), and the reveal that Sgt. Al Powell (the only cop that believes that McClane is the heroic vigilante he says he is) is afraid to use his own gun after a fatal accident just feels unnecessary and forced, as does what it leads to in the very last scene. But hey, how many holiday action films (at least, those I know of) get as close to sheer perfection as this one does? The answer: absolutely none. Yippie-ki yay, motherf—ker!