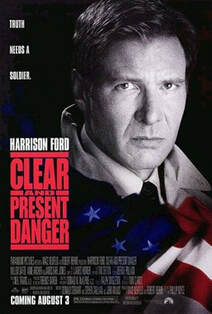 Weeks after seeing Clear and Present Danger, I am still baffled as to how it could get more critical praise than the excellent Patriot Games. I know I already mentioned that in my review of the latter film, but it bears repeating again. Oh, and as for why I would wait weeks after I saw Danger to write my review of it, well, after accidentally watching the Jack Ryan series out of order, I decided to do this little write-up on it after I saw the film I inadvertently skipped, Games, since it would–and did–give me a bigger perspective while formulating my opinions about both of them. But enough about all that.

In The Hunt for Red October, it was a secretly defecting Russian submarine. In Patriot Games, it was revenge-seeking Irish terrorists. This time around, it’s a Colombian drug cartel that Jack Ryan (Harrison Ford, in his last time playing the character) has to deal with– and the president’s involved, too. If you’ve seen any of the trailers promoting the film, you might think that this basic setup leads to constant high-octane action and white-knuckle suspense.

Unfortunately, while that may hold true for the thrilling second half, the first is actually dull to the point of–and I really hate to tag this kind of film with this word–boring, and how Paramount Pictures could have let the film pass with a ridiculously overlong 141-minute runtime without even so much as suggesting any cuts at all is simply inexplicable (too bad Terry Gilliam didn’t try releasing his equally lengthy masterpiece Brazil through there instead of Universal; if he had, there would have been none of the attempted studio interference that made it such a big news case back then).

Granted, I don’t think really long films are bad per se, but if you’re really going to stretch yours out to an epic length such as that, you’d better have a damn good reason to do so, which Clear and Present Danger doesn’t. (Really, it just doesn’t.) Maybe if about 20 minutes or so from the first half were cut in production, I’d be more willing to like the film, but since they weren't it is easily the weakest Jack Ryan adaptation that I’ve seen so far, and definitely a major letdown after the previous two entries in the series.