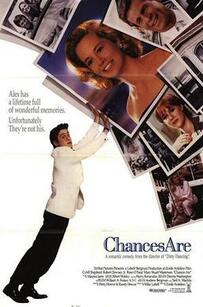 What would you do if you were not only reincarnated as another human being after you died, but also still remembered your previous life and could use that knowledge to get back together with the special people that were in it? This is the question that Chances Are answers, following what happens when its central character, a young district attorney named Louie Jeffries, unexpectedly finds himself in that very situation after fatally getting struck by a car in front of his horrified wife, Corinne–and now, he’s a 23-year old college student named Alex Finch who unexpectedly finds himself right in Corinne's house again. Talk about a seriously bad case of identity theft.

A bit of family history here: my mom and dad apparently watched this film all the time while they were dating, and even played “After All”, the song used to great effect at its closing scene, during their wedding dance. Even so, I admittedly still wasn’t expecting much when the former decided to have it be her pick for Friday Movie Night (or rather, Saturday Movie Night, since we unfortunately couldn’t get prepared early enough to watch it on Friday), but as with the last film I reviewed, my overall thoughts on it surprisingly wound up being a lot different than I had initially expected them to be. All right, this wasn’t as much of the case for Chances as it was for that last one, The Game (a very well-made psychological thriller marred by an incredibly stupid ending), but you get the idea.

Not only is the plot a tad more creative than I thought it would be, but it also led to the “com” surprisingly being focused on just as much as the “rom”, as well as an ending that was literally the exact opposite of what I had been expecting from this kind of movie, both of which really set the film apart from most others in the genre and led to me holding it in a slightly higher regard than them as a result.

About this jokier tone, though… it admittedly gets a little annoying in some scenes (Alex banging his head against a pole repeatedly, Alex’s dance partner–no, not Corinne–getting so excited on the ballroom floor that she passes out, an oddly dull-looking “heaven”), but the number of times it hits (Alex finally realizing that he’s really Louie and freaking out arguably being the best example of this) outnumber the times it misses just enough to get a pass from me. And besides, neither that or the woefully tossed-off "corrupt judge" subplot are the real issues I have with this movie…

Just so you know, I am most definitely not one of those people that lectures others over every single potentially “offensive” thing in old movies or the like, but I would just like to point out two particular things in this one that are so eyebrow-raising, I was left baffled as to how they somehow haven’t haven’t attracted the outrage of so-called “woke” folks everywhere: Alex bursting out of a closet and forcing Corinne down on her bed in a cringe-worthy effort to get her to realize who he really is (#MeToo much?), and Corinne’s daughter, Miranda, trying to hook up with Alex on account of not knowing that he’s actually her father in another body*. Yuck.

Ignore those unfortunate slip-ups, though, and you have yourself a romantic/comic fantasy a lot better than most–one you can not only watch comfortably with your partner, but actually enjoy just as much as them. In fact, for that type of situation, the film is simply essential. Don’t miss it.

*[SPOILER ALERT] Even more disturbingly, this is a temptation Alex unknowingly succumbs to at the very end after he finally does get the injection that makes him forget that she’s technically his daughter (by an angel temporarily taking on human form, no less), something Corinne is apparently just fine with since she tells Miranda that he’s "one of the only boyfriends you have that I actually like." Double yuck.