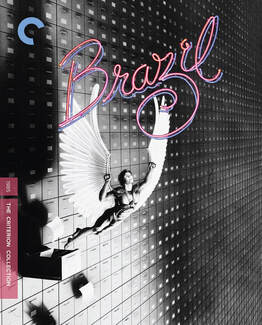 From 1932’s now-acclaimed Freaks to 2017's reviled Slender Man, Hollywood history is littered with cases of films being severely censored before release with the primary intention of making them more "audience-friendly". Horrifyingly enough, Terry Gilliam's classic black comedy Brazil was very nearly one of them.

Most likely fearing that the imposing 142-minute length and hauntingly bleak ending would result in it earning less money, Universal Pictures argued for a much shorter 94-minute version (now known as the "Love Conquers All" cut), which they probably would have released hadn't an enraged Gilliam fought his very hardest against it and finally forced the studio to compromise on a mildly trimmed 132-minute one supervised by him. Though this particular version wound up earning almost universally positive reviews and instantly being cemented as one of the greatest films of all time, the recently surfaced Director's Cut is the one I obviously saw... and was completely blown away by.

In this brilliant dystopian satire, Brazil follows Sam Lowry, an ordinary government employee who frequently uses surreal daydreams to escape his crushing life in a bizarre bureaucratic society frequently wrecked by terrorist bombings. However, when he's sent out to refund a tearful woman for her mistakenly arrested (and now-dead) husband, he stumbles across Jill Layton, a neighbor remarkably resembling the "damsel in distress" in those particular fantasies, and everything in his life changes.

While this plot is definitely engrossing (if a bit hard to follow at times), what really makes Brazil such a subversive masterpiece are the bizarre, extremely offbeat cinematography and set designs that just take you inside this demented world that Gilliam has conjured up inside his brilliant mind. In fact, even if you can’t really tell what’s completely going on, the film is still incredibly fun and thought-provoking to watch. Though every single scene contains something memorable (whether it be the propaganda posters, Lowry’s fight with the man in an adjoining room over their halves of a desk, the dream sequences, or even just the presence of terrorist-plumber Archibald “Harry” Tuttle), the film’s real genius lies in its flawless execution and seemingly endless imagination.

Admittedly, Universal did have a point when arguing that Brazil is too long and difficult for the most mainstream audiences, but that gleefully anti-Hollywood attitude only makes the film even more of a pleasure for sophisticated film buffs to watch, though even those who don’t fit that description are still highly obliged to see it at least once (in the original, fully uncut version, of course).