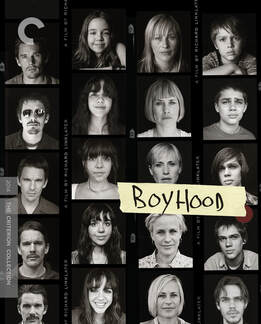 When most directors want to make a really “ambitious” film, they do something along the lines of, say, stretching it out way past the average consumer-friendly running time or squeezing some big, “meaningful” themes in the plot somewhere. When Richard Linklater wanted to make his own “ambitious” film, he filmed it over a period of 12 years, used the exact same actors as they grew up from fairly young children to fully mature adults, and even wrote the script as he went along. Thus, Boyhood, a film that can only really be described as sheer brilliance.

Starting off all the way back in 2001 (I only know this because of Wikipedia; there refreshingly isn’t any narration or big title cards saying anything about what year it is or how old the characters are at a particular point), the film follows a then-six-year-old boy named Mason Evans Jr. as his mother separates from her boyfriend/his biological father and moves to Houston a year later with both of her kids, including Mason’s slightly older sister, Samantha (played by the director’s own daughter, Lorelei Linklater, who is now serving three years' probation for DUI and drug possession charges, the latter of which she pled guilty to– ouch).

From there, we’re just watching Mason literally grow up before our very eyes as he–among many other things–endures his mom’s subsequent abusive marriage, struggles through school, visits his real dad, goes to a few parties, and gets into his first real (temporary) relationship, finally leaving us with a college student casually hiking up a mountain with his friends, not the small child we saw gazing towards the sky in one of the film’s opening shots, an image immortalized on the poster (no, not the one from the Criterion Collection edition I have above, this).

As admittedly thin on any real plot as it may be, there’s no denying that Boyhood is a marvel, pure and simple. Putting the same actors in the same roles for a time period as long as this one is an extremely daunting task, but Linklater accomplishes it flawlessly, unbelievably making what could have been a completely incoherent mess into something of true focus and power.

The film’s dialogue is realistic and memorable, the acting is great, the pacing never really drags once in the entire near-3-hour length, the cinematography looks absolutely beautiful in every single scene (Boyhood was shot on 35mm film), and the very well-chosen soundtrack (Coldplay’s “Yellow”– yes! The Flaming Lips’ “Do You Realize??”– yes!) wisely stands in for any score and helps give the film the more documentary-like feel it so benefits from in the process. If you have the patience for longer, more complex films, then please, please, please, please go out and watch this one right now. Trust me; you won’t regret it one bit.

Note: Boyhood is rated R because of its occasional bursts of harsh profanity (none of which came across as excessive or gratuitous the way a film like, say, My Cousin Vinny did), putting it on the same level with ultra-graphic gorefests such as Saw and Hostel in most absent-minded parents’ eyes and therefore barring some of the very adolescents it is targeted at from even seeing it. Ugh.

How do we fix such ridiculously nonsensical annoyances like this? Simple: since the strictly adults-only NC-17 apparently can’t be used for anything anymore, have the MPAA create another rating, PG-15, that would be a safe haven for films (The King’s Speech, Almost Famous, Bowling for Columbine, and–you guessed it–Vinny being just a few additional examples) a bit stronger than the fairly family-friendly PG-13, but not quite extreme enough to truly earn the more adult-oriented R. Adolescents would be able to go see these films in the theater on their own, but anyone younger than that would have to be accompanied by a parent the way R requires that for anyone younger than 17. Problem solved. But hey, what do I know? I’m just a lazy 16-year old film/music nerd.