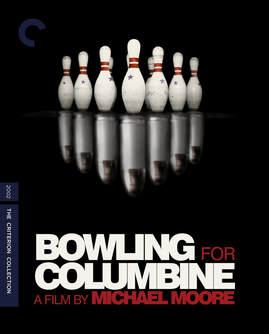 After the horrific mass shooting that took place at Columbine High School one April morning in 1999, the nation was scarred and confused. Though many claimed to know what had caused this life-shattering event, they were really just as unsure about what had just happened as everybody else. Little more than a couple years later, a documentary filmmaker named Michael Moore decided to make his next movie about America’s gun obsession, the country’s history of violence, the prevalence of violence-glorifying movies and TV shows, and how they all could have affected shocking tragedies such as that. The result: arguably one of the most vital films of our time, Bowling for Columbine.

Touching on everything from America’s destructive involvement in other countries’ affairs to their insistence on constantly spreading fear through the nightly news to boost ratings, Moore leaves absolutely no stone unturned when trying to answer the question “Are we a nation of gun nuts, or are we just plain nuts?” As such, the film admittedly can be pretty uneven at times (which gets especially frustrating when it wanders to places that are barely even related to the general subject matter at hand), but the general points that it’s trying to make always shine through. If anything, it’s the forceful, slightly one-sided way that Moore does so that really mar them, especially when his interviews-particularly the infamous one of Charlton Heston at the very end-come dangerously close to being just plain harassment/mockery.

Even with these annoying filmmaking tactics, however, Moore still has some undeniably important things to say about gun violence and this country’s effect on it as a whole with this film, and that ultimately makes it worth seeing by everyone interested in either of those topics- even those a little younger than the R rating might suggest.