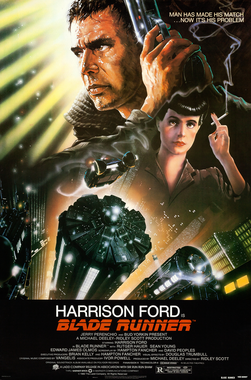 Terry Gilliam was smart to not let the hacks over at Universal redo his surrealist dystopian masterpiece Brazil. Just look at what that kind of studio meddling did to Blade Runner, the sci-fi noir classic that pointlessly had a forced “feel-good” ending and some really stupid voiceovers tossed onto it by Warner Bros because they thought it would make more money. (It didn’t.) Luckily, Scott had somebody assemble the “Director’s Cut” for him in the 1990s, and when that ironically made the film even more popular, his very own “Final Cut” finally came to pass in 2007, and is seen as the definitive version of the film. It is the only version of the film that I will ever see, and it should be the only version you ever see, too.

Blade Runner is set in a bleakly beautiful 2019 (yeah, sure) Los Angeles, where extremely lifelike robots known as “replicants”, who were made illegal after a bloody mutiny, are hunted down, tested, and “retired”—killed—by bounty hunters known as “blade runners”. The plot is kicked into motion by one of these blade runners, Rick Deckard (Harrison Ford, giving a typically good performance in what is perhaps his most unusual role), being assigned to take down four particularly well-known replicants, though the light, predictable turn this premise could have taken is deliberately ignored in favor of a darker, slower, more philosophical approach—which is exactly why Warner felt the need to fiddle with it, of course.

What Warner failed to realize when putting Blade Runner under the knife, however, is that no matter how much of this and that they added to it, it was just too unusual, too offbeat, and indeed, too brilliant to ever be made more “marketable”, and that anything they could possibly do would only make the film worse. Metaphors and symbolism (particularly the famous “unicorn” scene) run rampant in Blade Runner, though instead of bogging the story down, it actually heightens it by raising some serious questions about humanity, technology, spirituality, and the path Earth could potentially take if we’re not careful.

These messages smartly aren’t delivered in an overt, heavy-handed matter (in fact, Blade Runner practically cries out to be watched multiple times to get a real grasp of them), but I do understand why they led to the film being so divisive at first. Some audiences have likely even thought of it as a pretentious, over-serious bore as a result. Others have championed it as a powerful, thoughtful, chillingly prophetic masterpiece for that same reason. I happen to fall into the latter category.

Among the other main criticisms I see of Blade Runner is that there isn’t enough story or character development to keep things interesting. I disagree: the film admittedly may not have the most complex plot, but look at it below surface level and you’ll find the deep, somber mysteries it hides underneath its easily penetrable shell. Same thing goes for the characters, who don’t seem like much at first, but really grow and change the more you closely examine them (particularly in the case of Deckard, whose real status as a human is still debated year after year).

If you really want to know what absolutely floored me about Blade Runner, though, it would have to be the atmospheric, truly mind-blowing visuals. Scott’s vision of Los Angeles is a beautifully neon-lit, yet grimly smog-covered one, a place where the police cruise along in flying cars, but nobody can apparently do anything about the rain constantly pouring down from the sky. It is a place where futuristic science fiction and old-fashioned detective noir mix seamlessly, and although part of me knows that I would never visit it myself if given the opportunity, another part almost--almost—wants to do just that. Oh well.