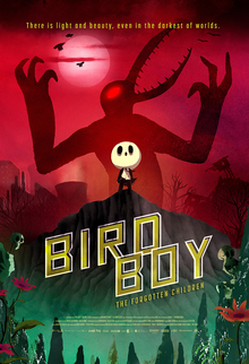 These days, most mainstream animation tends to be as safe, bland, and predictable as possible in order to rake in more money from desperate parents and such. We don’t really get anything that feels new, subversive, or daring, something that will stick with audiences’ minds long after they leave the theater. Birdboy: The Forgotten Children, a criminally overlooked Spanish animated adventure/psychological horror film featuring cute talking animals (yes, you read that right), is one of those rare exceptions, though that’s not the only reason I love it so much.

Birdboy’s setting is a bleak island all but destroyed by a nuclear catastrophe, on which live fully anthropomorphized animals as they desperately search for copper, the one thing that they can exchange for money, among the ruins. Our main protagonist there is Dinky, a teenage mouse that finally decides to leave her hostile parents once and for all with her best friends (a fox and a rabbit), though the unbearably cruel conditions and people around them may make that harder than it looks. Meanwhile, the titular character struggles with his drug addiction and inside demons while trying not to get killed by the ever-vigilant police.

In the wrong hands, the film’s disturbing, R-rated qualities (the “13+” recommendation on the back of the DVD is just laughable) could have easily been used for cheap, pointless shock value. Not here. There is a surprisingly deep meaning behind all of Birdboy’s nightmarish brutality, and even though you may not like it, it’s impossible to deny how effective it is in showing the dark side of human nature (ironic in a film only featuring talking animals, I know), be that in greed, drugs, or even religion (one particular scene with Dinky's parents is guaranteed to shock and offend any of the faithful that watch it).

Some of the characters, such as Birdboy, Dinky, her friends, or the father-son mouse couple always digging for the copper so precious to them, are just trying to survive or escape this hell on earth for as long as they can, but others, like the sadistic "Forgotten Children" of the title, really are evil to their very cores, and this stark contrast stuck with me days after the final credits rolled. Boosting this superb storytelling and characterization is the beautifully freaky animation and haunting, atmospheric score.

If Birdboy does have one noticeable flaw, it’s that at only 76 minutes, it doesn’t have as much time to develop the circumstances on the island (i.e. how copper became such a valuable item there) as it otherwise would, but the film is just too much of a bold, insightful treasure for that to really be an issue. Not for the squeamish or easily frightened, obviously, but those who can take it will be rewarded in droves.