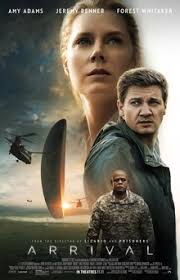 For as long as Hollywood itself has existed, there have always been aliens. From campy B-flicks, kid-friendly classics, blood-splattered horror freakshows, and popcorn-poppin’ blockbusters, these “little green men” have penetrated our culture almost to the point where it’s become a cinematic cliché. However, there is one film that is…well…slightly different from all the rest; in fact, it is so different that it just about boggled my mind. That film is most definitely Arrival.

Considering how many films have shamelessly borrowed from the genres mentioned above without adding anything new or interesting to them, the fact that Arrival does comes as a relief, but unfortunately, it is really bizarre. First off, in case you were wondering exactly how they would show the aliens that mysteriously show up around the world one day, the answer is simple: they don’t. OK, fine, we more or less see their silhouettes (from what I can tell, they sort of look like octopuses), but the rest is literally obscured by mist (or in the film’s case, gas that the aliens can breathe in), which is kind of annoying if you ask me, albeit not nearly as much so as the ridiculously pretentious direction the film starts to take towards the end.

Granted, the concept certainly is interesting, and Amy Adams’ performance certainly is stellar (if slightly overdone). It's just that Arrival would probably be a lot better as a thought-provoking sci-fi thriller than a thinly veiled metaphor on life itself or something like that (yes, you read that right), though for what it's worth, the film is solid enough for me to recommend for those interested in that kind of thing.