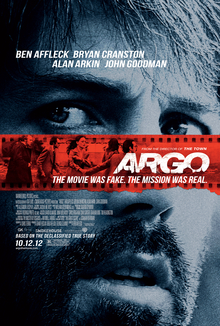 Ben Affleck’s career has unfortunately been bogged down by leading roles in critically panned films such as He’s Just Not That into You, Forces of Nature, and–worst of all–Gigli (the fact that it only grossed $7 million against a $75 million budget should give you a good idea of how much of an utter disaster it is). However, his much more positively received work as a director has thankfully redeemed himself in the public–and critical–eye, and Argo, his more-or-less faithful (more on that later) adaptation of an incredible true story, even won three Academy Awards, including Best Picture. So, of course, I obviously had to watch that particular film of his, and it didn’t disappoint at all–at least, not really.

After getting a little background information on the history of Iran (a very smart move, considering how a lot of the people crowding into theaters to watch the film probably don’t know a thing about the country), we then cut to November 4, 1979, where people riot outside the American embassy in Iran as a result of then-President Carter refusing to return the hated Shah to them from the US so he could be executed.

Unfortunately, as you may already know by reading about this stuff in history class or whatnot, things get completely out of control really quickly, and the rioters soon break into the building and take everybody hostage. Everybody, that is, except for six lucky people who slipped out the back at the very last moment and hide out at the country’s Canadian embassy. The CIA has to get them out of there, of course, but just how are they going to do that with people casually getting executed every day and everyone on the lookout for any more potential traitors? Well, that’s where Argo, a completely nonexistent sci-fi film that the escapees will pose as the makers of so they can evade detection and slip away, comes in, though the one really leading them through this so-crazy-it-just-might-work plan is Tony Mendez (Affleck), the brilliant CIA exfiltration specialist behind all of it.

For the most part, Argo is a very good film. The performances are great (especially from Affleck, whose character is thankfully a lot more reserved than you might expect), the plot takes its time building up the whole details of this unbelievably crazy situation instead of just jumping straight into things, and some of the tenser/more frantic moments literally–and I do mean literally–had me on the very edge of my seat. Also, some of the Hollywood satire on display towards the beginning (bolstered by hilarious appearances from John Goodman and Alan Arkin) is really funny, and gives the film a subtly satirical edge that further distinguishes it from the routine fare that particular industry mindlessly pumps out every single year to make some really quick cash.

Then the ending, despite being one of those effectively anxiety-inducing moments I was telling you about, completely ignores what really happened in the final moments of the group’s escape in favor of a ridiculous chase scene that even had my dad go “Yeah, right”, and any sense of hard-nosed realism that I might have had beforehand was kinda lost for me. In fact, upon looking it up on Wikipedia (God, I love that site), I learned that there were a lot of things the film changed from the true-life events it is based off of for the sake of gaining more audiences, rendering the aforementioned Hollywood lampooning almost completely worthless. And yes, I know what grade I gave The Social Network despite it also not exactly being a 100% true account of its subject (the formation of Facebook), but–as far as I cam remember, anyway–the differences there never became quite as distracting to me as they did with Argo. Oh well.

Look past that, however, and you still have a great spy thriller (another one of which, Tinker Tailor Soldier Spy, should be reviewed really soon since I actually saw it not that long ago) that neglects the typical guns and explosions associated with the genre in favor of suspense and actual conversations– in fact, that alone makes Argo well worth not saying “Argo f—k yourself!” to (only those who watch the film will truly understand that) as long as you don’t mind the historical inaccuracies.