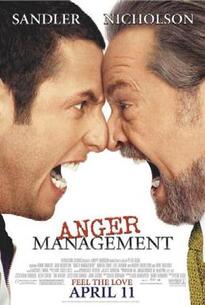 In case you haven't already noticed, I really tend to avoid these kinds of obnoxious, vulgar "dumb comedies", especially when they have Adam Sandler in them. If you happen to like them for whatever reason, that's fine, but taking 90 minutes or so out of my day to watch the same old annoying pratfalls and juvenile gags over and over again is something I would only ever do in the case of severe boredom. So why am I reviewing Anger Management, a film that both technically fits into that very genre and has Sandler himself (who, as a matter of fact, was fresh off the very well-received Punch-Drunk Love) as one of the main characters? Well, in short, I was rushing at the very last minute to find something to watch on Netflix as my pick for Friday Movie Night, and it was the only decent-seeming choice that immediately turned up; in fact, with that being considered, the film actually wound up being fairly good–which doesn't mean it wasn't without its problems, of course.

The basic setup for the film sounds like (and, for the most part, is) instant comedy gold: Dave Buznik (Sandler), a mild-mannered guy flying on an airplane, asks a flight attendant for a pair of headphones so he can watch the in-flight movie, but when she gets distracted and doesn't retrieve them, he keeps asking for them to no avail until he finally snaps and starts yelling at her, resulting in him getting tasered, arrested, and sentenced to anger management therapy. Unfortunately, the person he winds up working with, Buddy Rydell (Jack Nicholson, one of the biggest draws for me), may have even more anger problems than him.

For much of Anger Management, watching this clash of personalities, especially Buddy gradually destroying Dave's life, is genuinely hilarious in a really anger-inducing kind of way, but as the film keeps going on, it resorts to the kind of raunchy stupidity I was worried about just to keep things going, and the painfully sappy ending reveal (something the eerily similar, and far better, What About Bob?, was wise enough to avoid) doesn't even feel like it's part of the same movie at all. Even so, especially when compared the kind of critically hated tripe that Sandler's usually known for, this is a surprisingly serviceable comedy that's actually pretty fun–if you don't mind occasionally groaning between laughs, of course.
​
7/10