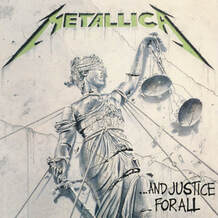 While metal, especially in its early stages, is known for being pretty complex at times, Metallica's fourth album, ...And Justice for All, is where this complexity reached new labyrinthine highs.

The band’s first album to be recorded after the tragic death of talented original bassist Cliff Burton (although he does receive a songwriting credit on "To Live Is To Die"), Justice sees the band extensively preaching and philosophizing about war (the smash hit "One"), paranoia (“The Shortest Straw”), censorship ("Eye Of The Beholder"), the fall of mankind ("Blackened"), and the like. This ridiculously overbaked songwriting is helped in no way by extremely excessive music (most songs nearly clock in at 10 minutes) and weirdly tinny production.

Despite Justice’s self-indulgence and flat sound, it stands as perhaps Metallica’s most underrated (and ultimately rewarding) set. Indeed, it was the last thing the foursome (including new bassist Jason Newsted, who bizarrely was almost entirely mixed out of the album) recorded before leaping headfirst into the mainstream with the non-thrash mega-hit “Enter Sandman” and its accompanying self-titled album. For that reason alone, ...And Justice for All is highly recommended for thrash historians and hardcore enthusiasts, though everyone else should start with the classic Master of Puppets instead.

Note: I know the rating you see below is a bit confusing, given how much more I criticized Justice than praised it, but it's the one I've ultimately decided on anyway since I've actually grown to really like the album over a while despite its (fairly) minor flaws. Go figure. Also, "One" is absolutely amazing.