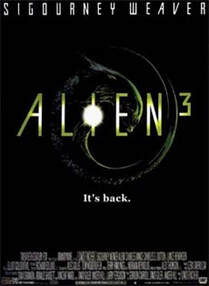 Everybody knows and loves the Alien franchise, the first two of which are arguably among the greatest sci-fi films ever made. Everybody also knows and loves David Fincher, director of modern classics such as Se7en, Fight Club, and The Social Network (to name just a few). So why, then, does nobody really know or like his directorial debut, which, in fact, was the third Alien movie? Well, although not quite as bad as critics like to say, this particular film just goes to show that those two very promising things can add up to much less than the sum of their parts.

This particular entry kicks off with a bang, or rather, a crash, as that's exactly what Ripley's ship does when it crashes into Fury 161, a maximum security prison housing many former inmates. Though the hostile surroundings and the fact that the crash killed everybody except her are bad enough already, what's even worse is that one of the facehuggers somehow got onto the ship while it was leaving the alien planet in the previous film and latched onto Ripley while she was in hypersleep, leaving a you-know-what growing in her. On top of all that, another alien baby suddenly bursts out of a dog's stomach (in the “Special Edition”, the dog is pointlessly removed altogether and replaced with a rotting cow, leaving a scene left in that particular version where somebody starts calling out for the poor pooch feeling very awkward) and starts wrecking havoc again. Will anyone survive at this rate?

While it can be commended for going in a completely different direction with its surprisingly grim tone and grungy setting, the thing is, despite fitting into the “sci-fi horror thriller” genre, Alien³ isn’t particularly scary or exciting at all, even with Sigourney Weaver’s typically great performance and the special effects looking slightly better than the first two films. As if realizing this, the film tries to compensate by taking the fairly subdued onscreen gore from the previous entries and vastly increasing it as if that will somehow make everything better or, at the very least, more entertaining, proving the point already made with the first film that great atmosphere is far more effectively jolting than guts.
​
However, hadn’t they just shoved the alien in there (really, how did it get in the dog/cow anyway?) and built up the tension between the alien-impregnated Ripley and the murderous inhabitants of this bleak land, the film could have actually been a lot better. As it stands, though, it is easily one of the weaker Alien films, though the fact that it isn’t really that bad, all things considered (especially since it boasts the strikingly tinted cinematography that Fincher would later become famous for), just goes to show how strong the series is. Even so, don’t go in expecting anything close to the suspenseful masterpiece that was the first film, or the popcorn-friendly thrillride that was the second.