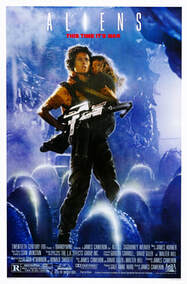 Considering how much of an original, truly scary smash hit it was, it comes as no surprise that a sequel to the 1979 horror classic Alien would be made. What does come as a surprise, however, is the fact that Aliens is not only a great sequel, but also a stellar sci-fi film in its own right that almost even manages to rival the original.

After drifting through space with its passengers in hypersleep for 57 years, the tiny little shuttle Ripley just barely escaped from the Nostromo with along with the ship’s cat, Jones, is finally found just by chance and brought to a massive space station just outside Earth. Though nobody initially believes her story of how an alien was unintentionally brought on the massive space-tug through one of its passengers and killed just about everybody, after contact is suddenly lost with a terraforming colony right on the very planet the alien was first found, she eventually agrees to accompany a military crew there to investigate what happened, finding herself coming face to face with these bloodthirsty creatures again- only this time, she’s ready for them.

Inevitably, a few important scenes/plot points are recycled from the first film to lesser effect, but in all other respects, Aliens could not be any more original or daring as a sequel. Even the plot is a lot more nuanced than you might think at first- when a scared little girl that calls herself Newt is found hiding after one of the aliens presumably killed her entire family, it only serves to increase the stakes and give Ripley something besides blind revenge to fight for. In fact, though more focused on action, this entry is just as adamant as building up terrifying suspense as the original, especially during the first hour or so. The icing on the cake: James Cameron. Yes, that James Cameron (his “Special Edition" cut is arguably even better than the theatrical version); Aliens was both directed and fully written by him, currently the only time somebody has done both of those things in the entire series. Perfect proof that not all sequels, especially to films such as these, are always guaranteed to suck.