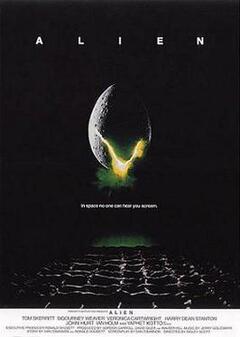 Nowadays, when sci-fi horror flicks with pretty much the exact same formula are about as common as anything, it might seem all but impossible to really know the impact Alien, the film that literally started that entire genre, had upon critics, audiences, and general film culture when it was released all the way back in 1979 (exactly 40 years ago now). Even so, the fact that some of the most recent excuses for “scary” films only have ineffective jump scares and pointless gore to offer instead of anything that’s actually, well, scary only makes Alien’s daringly original creepiness and suspense even more of a truly haunting, nerve-shattering experience.

In some unknown year in the future, the (admittedly dated) technology on a massive space tug called the Nostromo awakens its passengers out of hibernation as a result of a distress call from a nearby planet. Though they all really just want to go home, protocol forces them to land there and investigate. However, while doing so, one of the crew members is attacked by a bizarre alien lifeform, resulting in a series of increasingly bad decisions afterwards leading to an unimaginably awful terror being wrecked on all of them, which additionally leads to the shocking true reason for their journey being discovered.

As I already stated beforehand, Alien’s plot admittedly may not sound too terribly special today, but the fact that the film’s screenwriter, Dan O’Bannon, came up with this idea from nowhere but his own mind and director Ridley Scott flawlessly brought it to life is nothing short of incredible. What’s even better than that, however, is the fact that their finished product is actually incredible in itself when it easily could have been just lazy and stupid. Though there is barely any onscreen carnage (in fact, the only thing really earning the R rating is the infamous “chest-bursting” scene, and even that isn’t lingered on), the terrifyingly eerie-or, in some cases, even peaceful-atmosphere created for all the horrific events that gradually unfold is far more chilling and lasting than a million gut-splattering kill scenes. Add Jerry Goldsmith’s wonderful score, a pack of talented actors (Sigourney Weaver among them, who shot to fame with this film), and H.R. Geiger’s impressive work on the titular monster, and you have what can only be described as a true horror classic.