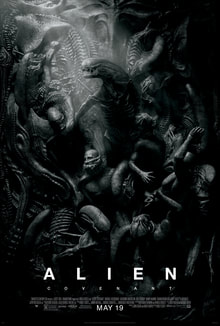 2012’s much-hyped Prometheus was that very rare thing: a prequel that was surprisingly just as good as the films that kicked off the franchise it's proudly a part of, and the resulting expansion of that film (a sequel-to-the-prequel, if you will), 2017’s Alien: Covenant, can’t quite escape its massive shadow. Even so, the latter still has enough strengths (and weaknesses) of its own to make it a noteworthy entry in the Alien series, and certainly one worth discussing at length here.

More or less picking up where Prometheus left off, Covenant opens with that film’s android, David, talking with his creator, Peter Weyland (founder of none other than Weyland Corporations, the “evil company” present throughout the series), after apparently being started up for the first time; during this conversation, he makes a rather unnerving quip about outliving everybody, including the very person that created him. Cut to 2104, and the colonization ship Covenant is severely affected by a massive shock wave, resulting in the tragic burning death of one of the crew members in the sleeping pods.

With nobody wanting to go back in them and be put in hibernation for another six years or so before reaching their destination, planet Origae-6, the captain decides to land on the seemingly “perfect” planet they just received a mysterious transmission from. Predictably, that turns out to be a very bad idea (does doing that ever turn out well for anyone in the movies? Geez), as some of them exploring the planet’s surface without helmets results in what looks like flying black dust (???) entering a couple of their bodies through their ears and noses, resulting in baby Aliens bursting from their backs and mouths and killing nearly everyone around them.

By this time, you’d think the suspense and terror would go through the roof, but no. A little while after that, for some inexplicable reason, we get more of the deep philosophical musings of Prometheus until the bloody chaos begins again, resulting in the film’s middle wildly careening between the slow and thoughtful and the horrifically violent. Pacing/tonal inconsistencies aside, though, Covenant is actually way better than I was expecting, and probably a lot more so than it had any right to be. Yes, the gore is way over the top (in fact, this is easily the grisliest entry in the franchise), but it is matched with some genuinely spooky moments and the beautiful cinematography.

Speaking of the latter subject, I’d just like to say that as with Prometheus, I personally love how the alien planet can finally be seen and explored in its true lush-yet-deadly glory since they're filmed in New Zealand instead of at some studio in the dark like Alien and Aliens​ were. Additionally, without giving anything away, continuing David’s character arc from that particular film (how it and this one are connected isn't made clear at first, by the way) is absolutely brilliant, and if the other prequel film announced to currently be in the script phase ever commences, I really hope that it focuses on him again.

Unfortunately, even with all that, Alien: Covenant​ still doesn’t quite join the ranks with some of the series’ best entries in my book (though now that I’ve seen all of them, I can safely say that the worst one ever is Alien Resurrection, not that film), but it doesn’t deserve the predominantly mixed reaction it got from fans and critics either. Seeing Prometheus first is very highly recommended, but you could definitely do worse when searching for sci-fi horror that's serviceable enough.