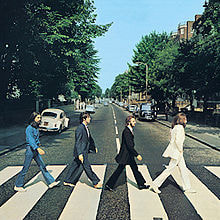 With the possible exception of their self titled-release (aka the White Album) not one disc in The Beatles’ entire catalog is as uneven in terms of song quality as Abbey Road.

For the first couple of songs, however, the album seems to be the band’s greatest yet. “Come Together” builds it up with subtly teasing riffs and crooning vocals that would be right at home in an Aerosmith song (who actually covered that very song masterfully for the otherwise terrible film adaptation of Sgt. Pepper’s Lonely Hearts Club Band), and George Harrison’s wonderfully spacey “Something” sends it sky-high. Unfortunately, it is only the next track, the “funny murder song” (as the band dubbed it) “Maxwell’s Silver Hammer”, that sends it all crashing down again. Luckily, the band promptly manage to pick the pace back up with the psychedelic “I Want You (She’s So Heavy)”, (which is only beaten by “Revolution 9” for the Beatles’ longest song) before the fantastic “Here Comes The Sun” easily makes up for any previous flaws. Unfortunately, pretty much the entire rest of the album dissolves into mostly half-baked 1-2 minute songs before finally coming to a close with the fittingly titled “The End”. Although the tongue-in-cheek hidden track “Her Majesty” technically is the album’s last song, it is “The End” that really does put the final curtain on The Beatles’ unforgettable career.

So, to sum it all up, while this album is admittedly almost spoiled by a few cringe-worthy lows, it is luckily saved by the wonderful highs, which ultimately make it an undeniably vital entry in the Fab Four’s vast discography.