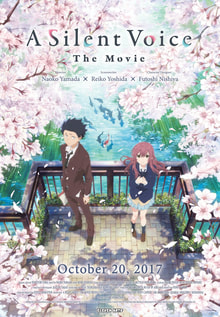 Bullying is a pretty tough topic to tackle on the big screen. Therefore, when my sister finally got to choose A Silent Voice as her pick for movie night, I was really hoping for an honest, hard-to-watch look at the subject that pulled absolutely no punches with its thorny subject matter. Unfortunately, I got a disappointingly clumsy and unfocused-albeit prettily animated-example of why some mangas (from which this film is adapted, hence its full title including the oh-so-original clarification that yes, this is The Movie) are best left staying mangas.

Admittedly, the film doesn’t start off that badly. In fact, using the Who’s “My Generation” over the opening credits was a very smart move, and a few of the ways our main character, Shoya Isida, and his friends cruelly taunt and harass the new girl, Shoko Nishimaya, at their elementary school because she’s deaf really are kind of painful to watch. However, when she finally transfers somewhere else, the film flashes forward to when Shoya’s entering junior high alone, friendless, and even pondering suicide. Most of all, though, he just wants to make things right with Shoko and apologize for how utterly awful he was to her back then, but doesn’t quite know how yet. Here, his struggles with the feelings of regret, sadness, and utter despair for what he did in the past should’ve kicked into high gear, but all of that is resolved way too quickly as he almost immediately manages to just become friends with her around the 30-minute mark, and the rest of this 130-minute long film just meanders aimlessly as a result.

In case you haven’t already picked up on what else I’m trying to say here, it’s that although A Silent Voice addresses some really dark and complex topics well worth having light shed on (the aforementioned bullying, physical disabilities, self-hatred, and severe depression), but doesn’t quite dig into them enough to make that much of a real impact; as such, by the time a disturbing climatic event involving attempted suicide finally happens, it just feels like it just came out of nowhere instead of actually being a logical part of the story. I’d get into how the character of Tomohiro Nagatsuka is way too cartoonish for what is supposed to be a serious drama and essentially ruins the film’s entire tone as a result, or how the “X”s over most everybody’s faces that apparently symbolize how Shoya has pretty much shut off the entire world get really annoying after a while, but I think I’ve already made my point clear by now. It certainly means well, but this Silent Voice should've been just a bit louder.