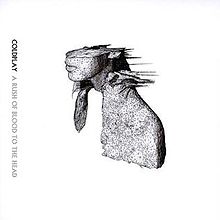 After Radiohead controversially stepped down from their role of the most important rock band ever by releasing the startling electronic masterpiece Kid A, several other bands rose to the challenge. Chief among them was the ever-peppy pop-rockers Coldplay, who hit the nail on the head exactly once with their sophomore release, A Rush Of Blood To The Head.

While Coldplay’s other early albums (Parachutes, X&Y, Viva La Vida) each have their moments, Rush is the only one that has enough to justify a full set. True, Chris Martin’s vocals are as annoyingly passionate as ever (as is the melodramatic songwriting), an irritatingly large amount of gooey emotion is poured on every song, and nothing even remotely reaches the level of flat-out amazing (or even really that memorable, for that matter).

However, if you’re not expecting something jaw-droppingly brilliant, or just want to put on something pleasantly enjoyable to relax to, the album’s more than satisfying enough to warrant a full listen. Indeed, considering how much of the band’s greatest hits (“God Put A Smile Upon Your Face”, “The Scientist”, “Clocks”, “Green Eyes”) are on here along with their most underrated tunes (“Politik”, “Amsterdam”, the title track), it’s no wonder that Rush is easily their best album, especially considering the unbearably bland pop-electronica they would regrettably venture into later.
​
Overall, if you have to listen to one Coldplay album (or just want to see what the whole deal is with them), this is the one to go for, although the more sophisticated listener should seek out Wilco’s infinitely more powerful Yankee Hotel Foxtrot instead.

Note: My original grade for A Rush of Blood to the Head was probably something along the lines of an 8/10, but with time, I've actually really grown to like the album a lot more than that, and now award it the grade you see below.
​
9/10
​
​​© 2019 Ben Parker
All Rights Reserved.