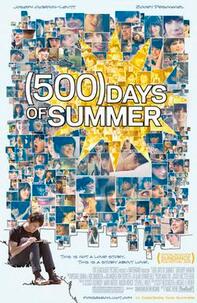 As a whole, the entire “romantic comedy” genre is just way too cheesy and predictable to me to ever take a liking too. Therefore, when I finally decided to pick (500) Days of Summer for movie night, it was only because famed YouTube film critic Chris Stuckmann had included it in his bestselling book The Film Buff’s Bucket List (and he normally loathes these kinds of movies, so the fact that he included that one in it was really impressive to me at the time), and even then, I was admittedly still having my doubts about it. However, not only did it wind up far exceeding my expectations, but even accomplishing the seemingly impossible feat of reviving my hope in the genre.

Though told through a mostly nonlinear structure (in fact, the film’s beginning includes a glimpse of its end), the film’s plotline seems pretty clear at first: a boy, Tom Hansen, meets a girl, Summer Finn, and they both fall head over heels in love. Think you know where this is going, do you? Well, as a matter of fact, you don’t. You really, really don’t. In fact, this is probably the only rom-com that’s best gone into completely blind, as its completely unpredictable twists and turns involving what actually goes into a relationship are what make it so surprisingly hilarious and painful to watch; in the film’s most touching scene, a split-screen shows us both what Tom expects meeting with Summer again to be like and the heartbreaking reality of what it actually is like, making us viewers realize with a start how willingly disconnected Hollywood has become with reality just for the sake of selling more tickets. A lesser film would have drowned this superb moment in as much gooey sentimentality as possible, but the utter lack of such tripe there (or anywhere else in the film, for that matter) ironically makes it even more affecting.

Admittedly, not everything in (500) Days of Summer completely works. The narration, while helpful for setting everything up and moving the plot along, occasionally edges dangerously close to getting a bit too clever for its own good, and the constant time-hopping is a bit disorienting at times, but neither comes close to seriously tainting the only romantic comedy of this century that really is romantic, funny, and touching in equal measure. The closest thing to a modern-day version of Annie Hall that we’ll probably ever get, if you will.