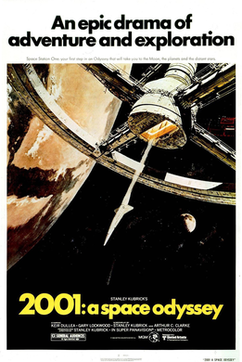 Believe it or not, I actually tried watching 2001: A Space Odyssey with my dad when I was around 9 years old, just like he did when he was that age. And of course, just like he also did when he was that age, I wound up turning it off within the first 15 minutes or so since it just looked so incredibly dull and boring to me. Now, I’m a 16-year old film critic who takes the art of cinema very seriously–and as such, I figured that the time was just right to give that one a try again, though as a matter of fact, it probably wasn’t since I didn’t wind up liking it nearly as much as most other critics seem to. Ah well, guess I’ll just have to wait another seven years or so and see if I absolutely love it then. As for now, here’s my current thoughts on this extremely famous sci-fi film:

First, the good. Stanley Kubrick’s direction is obviously superb, and the various tricks he uses to blow the audience’s mind–suddenly turning a bone into a satellite via one of the most famous jump-cuts of all time, juxtaposing classical music with the sight of rockets moving through space, revealing that a slightly unstable computer system named HAL was reading the men’s lips all along–still influence generations upon generations of directors to this very day.

Oh, and speaking of HAL, the part with him is so effectively chilling that it’s easily my favorite thing in the entire movie. I mean, seriously, you’ve got a supremely evil piece of technology that not only has control of the entire spaceship you’re on, but is using that power to kill off all your fellow crewmates and even prevent you from getting back on it! How does it possibly get any scarier than that?

Then there’s everything else, which… isn’t nearly as memorable, if you ask me. I realize that I have not explained what the film’s actual plot is yet, so here’s my attempt at a basic summary: After a “tribe of hominids” (as Wikipedia puts it) discover a bizarrely featureless alien monolith, they suddenly gain the ability to fight each other with bones, presumably moving them forward as a species in the process. Fast forward millions of years later, and when that same monolith is discovered emitting a short radio signal towards Jupiter, a manned expedition is sent out towards that planet to investigate it on the Discovery, a ship fully equipped with–you guessed it–HAL.

Unfortunately, with the exception of the aforementioned HAL segment, none of these narrative elements really work together that well, and much of the film is left feeling really disjointed and pretentious as a result. And as for the ending… I’m not going to get into the specific details of it for the sake of remaining completely spoiler-free, but suffice it to say that while it certainly “means” something, its confusing metaphorical aspects also don’t quite fit in with everything else here. In other words, the film’s biggest flaw is how much its epic reach exceeds its actual grasp, which is really a shame, given the very thought-provoking subject matter touched on during its bold 142-minute runtime (life, death, evolution, space, you name it).

But hey, it’s not like I totally hate the film. In fact, I gave it the pretty positive rating you see below (mainly because of HAL, of course, but still), and do highly recommend it to those taking film school or, at the very least, studying classic cinema. I just don’t see how it is the flawless masterpiece that everyone seems to think of it as, that’s all. Then again, neither did Andrei Tarkovsky, and he’s the guy responsible for making equally renowned sci-fi classics such as Solaris and Stalker that have made it into the Criterion Collection, an honor curiously not bestowed upon 2001 as of the time I’m typing these words.